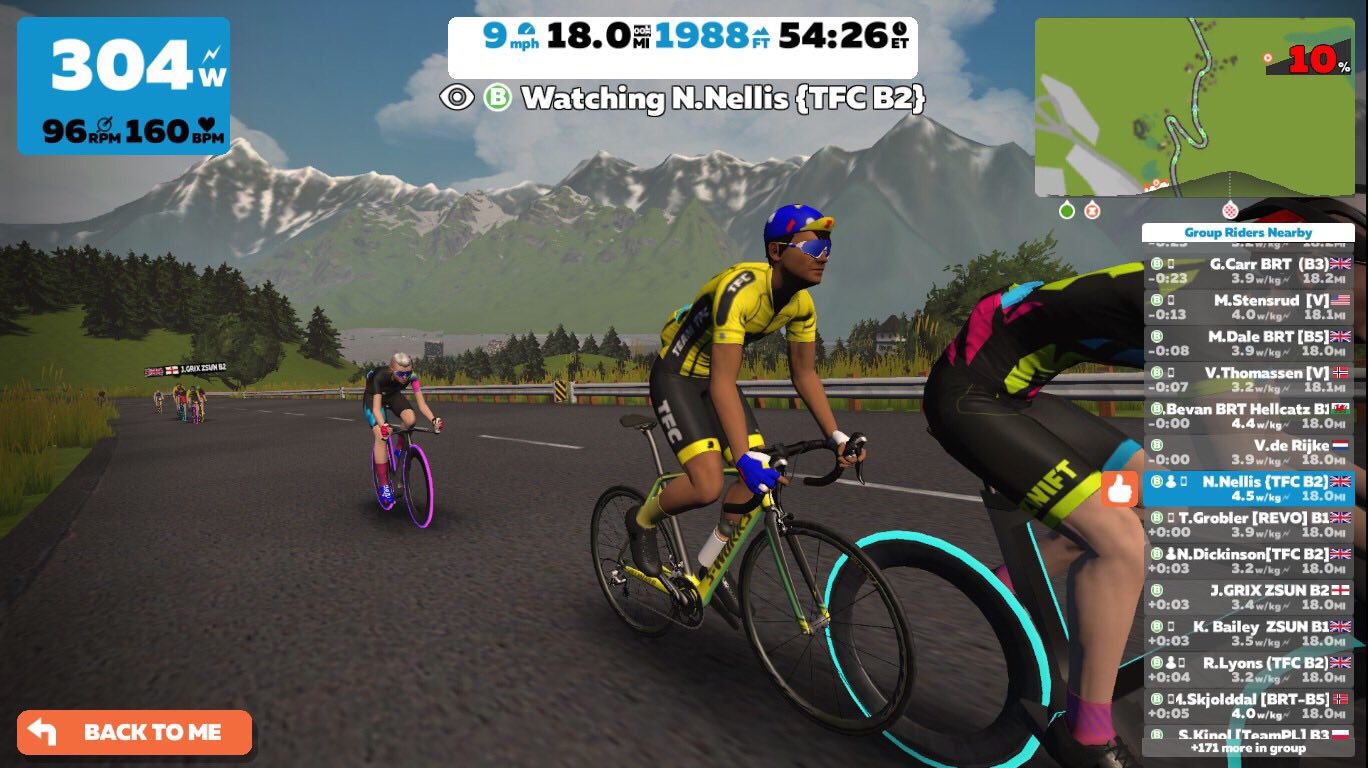 After setting the scene previously, let’s delve a bit into my first year of Zwifting, as I am sure you are all eager to know!

So as mentioned, I started off Zwifting at the end of 2017 using the infamous Elite Turbo Muin, a fluid based direct drive trainer. The trainer itself was great. It was very silent which was perfect for using in the living room. I started off hooking up an iPhone to the TV which worked fine for a while. Now when I started out, I was mainly going on free rides, exploring the Zwift world as well as trying out the odd workout. My main aim at this point was just to get back into doing exercise and try to lose some weight! I then started joining some group rides (mainly the PACK rides – highly recommended!), and learning more about how Zwift works. During this time, I discovered zwiftpower.com

It wasn’t until a couple of months later did I discover racing  – or at least built up the “courage” to try a race. I remember being quite apprehensive about it all! I had no idea what to expect. So one Friday in January 2018, I found some race, calling itself a Criterium 😉 A nice loop around Watopia Figure 8 where I took 2nd place, woohoo! What a rush, what a feeling! I was hooked! A couple of weeks later I took a win! Amazing stuff! ****Insert pics here). And then I entered a WBR race, thinking I had won it… Checked out Zwiftpower to confirm my greatness and POW, a DQ! What for? For ZP… I really didn’t understand this as I thought I had a power meter in my awesome Turbo Muin! After a lot of googling and talking with various people… I discovered the horrible truth about my trainer and the power curve. So finally understanding the issues, I decided to splash out on a power meter as I didn’t want to buy another trainer. Since I also enjoyed riding outdoors whenever I got the chance (almost never), I went for the Assioma Duo pedal power meter (I just couldn’t handle another DQ for ZP!)

I am not sure know why exactly, but I decided to apply for, and join TFC in March, I think mainly because I had done a few races with them on the Fridays and they seemed like a rather good bunch (seems I was mostly right there, haha). So, after recovering from the shock of seeing what my real power output was (around a 50w drop…), I continued with mainly social rides and the odd race, as well as the Tour of Watopia. Within a month, I had managed to build my power back up, along with a fair bit of weight loss, and I was back to being at the pointy end of C. During the summer months, I kind of plateaued and racing motivation wasn’t quite there with zwiftpower having being down for a while (good old GPDR issues), plus I had got myself a nice gravel bike and was commuting to work, throwing in the odd extra kilometers on the ride home.

So toward the end of summer, I somehow managed to be knocking on the door of Bs and in a short race, got a WKG DQ. At this point, I figured I should man up, and I jumped into racing Bs. Well that was certainly an experience, going from fighting for podiums in C to hanging on for dear life in Bs! But boy am I glad I did it… I had obviously subconsciously been holding back in Cs, as my FTP just started going up and up (my results not so much, haha). I realised that I had a real climbing weakness, so then made the effort to try and race hillier courses. Doing this for a while really paid off over time, and toward the end of the year, I was up to the pointy end of Bs. The biggest difference I had found was that I was able to hold on to the front groups so much better up the various drags and hills, enabling me to then recover in the bunch after. Such a huge difference!

So here I was, feeling pretty good about my achievements through the year, getting really excited about the season ahead in zwift racing, with a lot of cool series lined up. I was planning out the other areas of weaknesses that I needed to work on (sprinting/short power) and considering the move up into As to push myself even more. I had managed to lose a lot of weight during the year and was looking to lose more into the main racing season. I had upgraded to a Wahoo Kickr Core to improve the overall Zwift experience, got a new frame to build up as a dedicated indoor bike, built up a new media PC so that I could monitor more stats and live stream too and then…