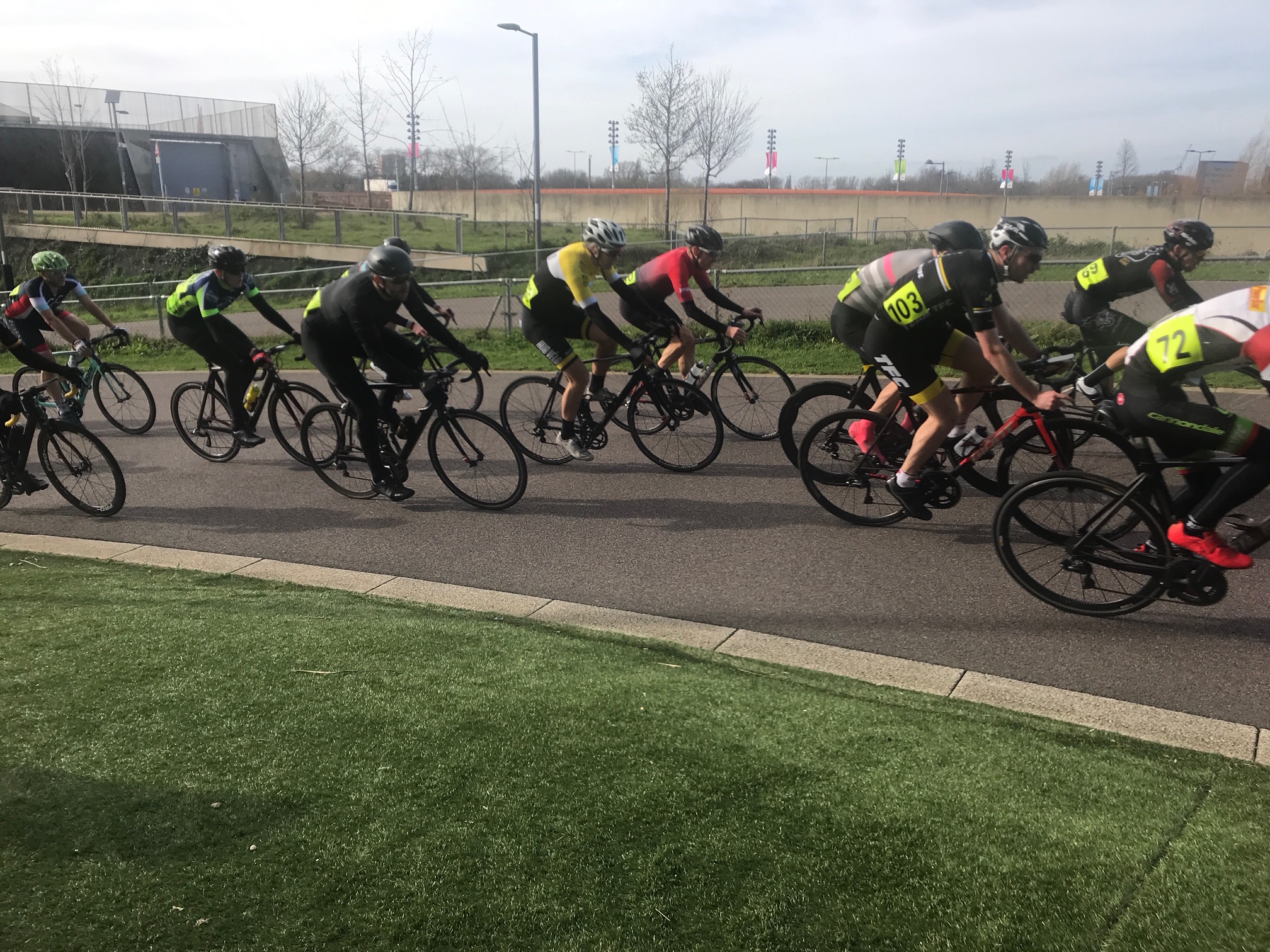 I managed to find another Saturday to go along and try my hand at Crit racing. Having messed up my first race (at Hillingdon) completely trying to close down an attack and blowing up, I had two aims – 1) Stick with the bunch the whole race and learn a lot more about positioning and 2) Stay out of trouble and don’t crash on the final lap. This week’s race was at Lee Valley VeloPark which is a short road circuit in the same complex as the Velodrome that hosted the London 2012 Olympics.

We packed everyone into the car again and headed to Lee Valley. The one benefit on this one is that it’s right beside the Westfield shopping centre, so we headed down early and grabbed some lunch with another TFC member (Andrew Block and family) before I headed over to the VeloPark and got ready. Note to self – 90mins before a race is still too close to be eating food but more on that later.

I got to the VeloPark and was starting to get my stuff out of the car. My front wheel which I had pumped up just before leaving the house had gone soft – no problem I thought – I’ve got a pump. I started pumping it back up and had that sinking feeling when you notice sealant is coming out of a rip in the tyre and forming a nice little puddle on the ground. I’m not sure where the rip came from, but I had a problem – I had headed out the door without two things I normally bring: a spare inner tube just in case and tyre levers.

It was time to beg borrow and steal to get myself to the grid. I managed to buy an inner tube from the reception at the VeloPark and now I needed to borrow some tyre levers. Thankfully most racers are a lot more prepared than I and that was an easy task. Getting a tubeless tyre off is to say the least REALLY HARD but eventually I got one side off and man does that sealant make a mess (sorry left phone in the car so no pics). Within 10mins I had an inflated tyre and I was on my way to the grid. Hopefully nobody minded my front wheel being a mess of sealant, but it didn’t take too long for it to look a bit better.

We had a few mins to warm up on the circuit and for me to figure out where the track goes. It’s a short but fun little circuit with a few kickers, a hairpin and one good fun flat out bend over a rise. I knew the hairpin would make for fun in a race that there were over 50 riders! One thing I Was well aware of was how windy it was – this made the start – finish straight hard work at the front and it made the last corner a lot of fun as you basically had a rise and a 20mph crosswind.

We were set off and this time instead of going off from 3rd place, I put myself in the middle of the bunch which was fine as the first lap is neutralised to let everyone clip in. The first few laps were at a decent pace and it took me a bit getting used to riding in such a big bunch but eventually I got myself comfortably into mid-pack and it wasn’t too hard to stick with it as the pace felt like it dropped a bit after 20mins.

It looked like there were quite a few attacks attempted off the front but very few of them stuck given the headwind and the group worked quite well together to close them down (although I couldn’t always see what was happening up front). The most frustrating part of the lap was the hairpin – it was a huge choke point when you’re mid pack and the speed it was being taken at was safe but felt painfully slow and meant you had to put quite a bit of power down coming out of it to stick with the bunch.

On the penultimate lap I was reminded of how recently I had eaten my lunch after a slightly badly timed attempt at a drink. So I spent half a lap trying to not let my lunch return! As we started the last lap I was moving through towards the mid pack but before I reached the sharp end I let my head overrule my heart and eased back towards mid pack remembering my aim #2 for the race – DON’T CRASH and also knowing that the circuit is renowned for last lap crashes. It seemed to be the right choice – about 15 places in front of me there was a crash on the last lap coming off the last corner and I had plenty of time and space to avoid it.

I ended up coming 25th out of >50 riders which for a Cat 3/4 race and me being Cat 4 and in my second crit I’m quite happy that I managed to stay with the bunch and it didn’t feel too taxing. I learnt a lot about riding in a big bunch and didn’t seem to be causing any trouble for others. Finally I didn’t crash. Onwards and upwards I hope – next week (Sunday 17th March) I’ll be taking on a 53 mile road race which will be a completely different challenge I’m sure! I’ll also be sure to remember some spares as well!

PS – there was a photographer there and I will add some more pics when they are available.

The Zwift Build Up